Moving Against Greed and the Culture of Consumerism 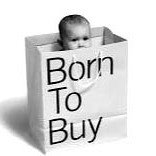 ...In order for us to effectively move against the illusion of overpopulation AND against the terrible needs facing the world's populations, we must confront the god whom we most worship in the West. The god of materialism. As a philosophy, materialism is much more than the acquisition of goods; it is a way of life that distracts you from the needs of others. Materialism, with its dedication to comfort and pleasure, distracts the Westener from focusing in on the most immediate targets of ministry for others. Indeed, materialism, in its concentrated attention to things, actually devalues human beings.

The consumer culture that has been established in Western Europe and the U.S. and which we are now exporting into lesser developed nations devalues the individual by its concentrated attention to advertising, consumerism, emphasis on gadgetry, artificially heightened dependence on toys, etc. So when a woman tells you in front of an abortion clinic that she cannot afford another child and yet she has driven in with a new car and is dressed in finery and jewelry, one should ask, "What has happened here?" People have been devalued by things - in this case, devalued in the greatest extreme. Luxuries have become necessities to such a degree that we won't even consider even the sacredness of human life to be a priority over things.

Materialism breeds greed. In the old Westerns that I watched while growing up, there was often a scene where the bandits are figuring out how to divide their booty from the stage robbery or whatever. You remember the scene. There's always one of the guys that looks at the weakest member of the party as he wonders if he can do away with him in the night. And what do his partners say? "Hey, that will be more for the rest of us! That will be one more share that goes to us!"

This very attitude is a key plank in the platform of many of the population controllers but, worse yet, it becomes an unconscious motivation for the rest of us. Whatever rhetoric is used to assage our consciences, we intuitively understand that sharing goods or space or time with others costs us! So, rather than bear the costs of others, we end up being protective of our "share of the stuff."

In Southeast Asia, a traditional monkey trap consists simply of putting a date or some nut other treat inside a coconut. The monkey reaches in the coconut, grabs the date, and he's caught because the size of his fist inside the coconut is larger than the hole in which he inserted his open hand. The goofy little thing will not let go of the treat even to pull his hand out. He keeps his hand gripping his reward even though it means his capture and doom. This is exactly what is happening to the Western World. Our greed blinds us to the needs of others, and endangers the future security and peace of all...

(An excerpt from "Population Problems", an address delivered by Denny Hartford at a Vital Signs Ministries "Frontier Issues" conference.)
Posted by DH at 4:20 PM