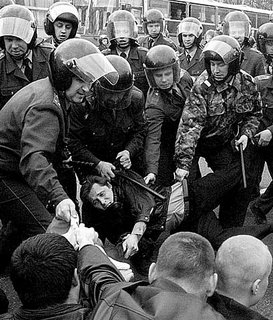 Life goes on as normal in Belarus:

1) The government is denying "Nasha Niva", an independent weekly permission to have a legally registered address in Minsk, which will almost certainly force the cessation one of Belarus's very few surviving independent newspapers. The authorities say the punishment is justified because of a 10-day jail sentence imposed on "Nasha Niva" Editor-in-Chief Andrey Dynko during the antigovernment protests in Minsk in March. Dynko's response? The action is a "legal absurdity" based only on the officials' fear of any opposition voice whatsoever.

"Nasha Niva" is the first regular Belarusian-language newspaper, which was published in Vilnius in 1906-15 and resumed publication there in 1991. In 1996, "Nasha Niva" moved its office to Minsk. Like most Belarusian opposition-minded newspapers, "Nasha Niva" was denied the possibility to be disseminated in 2006 through the state-run network of kiosks and the state postal service.

2) Uladzimir Katsora, head of one of the regional campaign offices of Alyaksandr Milinkevich (one of the brave Belarusians to run as an opposition candidate to corrupt dictator Alexander Lukashenka in the March 19 presidential election) has been sentenced to 10 days in jail for applying for permission from the city of Homel to conduct a peaceful, orderly and, according to national and city statutes, completely legal demonstration. Katsora was arrested and found guilty of organizing an unsanctioned demonstration. That's right; the arrest and sentencing was for something that had not happened!

"Katsora has filed an application with the Homel City Executive Committee for permission to stage a demonstration in the city on April 25 on the 20th anniversary of the Chornobyl accident," said Yury Zakharanka, Katsora's colleague. "Although the demonstration is yet to be staged and the city authorities have not yet announced its decision on the application, he has already been convicted."
Posted by DH at 5:23 PM