Will Moscow Continue to Back Lukashenka? 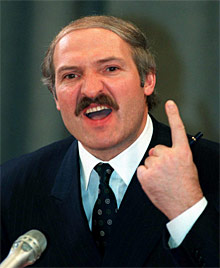 Claire Bigg is an Radio Free Europe/ Radio Liberty correspondent based in Moscow. This is her report on last week's election in Belarus and on the reasons why Russia continues to support such a totalitarian thug as Lukashenka.

While Western leaders have openly expressed their distaste for authoritarian Belarusian leader Alyaksandr Lukashenka, Russian President Vladimir Putin has consistently supported his regime, both politically and economically. Russia has been providing the country with cheap oil and gas, generous loans, and has cancelled customs duties for Belarusian exports to Russia.

According to official preliminary results, President Lukashenka won a landslide victory in the March 19 presidential election, garnering 82.6 percent of the vote. An official victory would enable Lukashenka, a former collective-farm manager who has ruled Belarus since 1994, to win a third term and remain in office for five more years.

Putin formally congratulated Lukashenka on his victory in a March 20 statement, saying that the "results of the elections point to voters' trust in your policies and to the further growth of the prosperity of the Belarusian people." 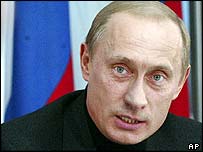 Opposition leaders are claiming the vote was rigged and have called for new elections. Several thousand people have massed in a central Minsk square to protest the results. But while the huge margin of victory granted to Lukashenka by the preliminary results has raised some eyebrows, it is widely believed that he does enjoy enough support at home to have won a majority and avoided a runoff.

Many political observers say Lukashenka owes his popularity not only to intense propaganda, but also to Russia's robust economic aid, which has allowed him to raise pensions and salaries. But why is Russia throwing its weight behind such a controversial figure as Lukashenka, who has been isolated by most Western leaders and branded a dictator by Washington?

Yevgeny Volk, director of the Heritage Foundation think tank in Moscow, said Russia's support reflects its fears of losing its closest ally in opposition to NATO's eastward expansion. "From the point of view of the Russian political mentality, Belarus is a very important stronghold of resistance to NATO's eastward expansion, a containment of this NATO expansion that is often discussed in Russian political circles," Volk said. "In the Cold War paradigm that is still very present in Russian politics, Belarus plays an important role as a stronghold against NATO."

While the European Union on March 20 expressed its disapproval of the way in which the presidential election was conducted and said it will likely impose sanctions, Russia hailed the vote as free and fair. Strategic interests aside, Russia has a number of reasons to back Lukashenka. The Kremlin has been anxious to prevent a repetition of Ukraine's Orange Revolution, which swept the Western-leaning Viktor Yushchenko to power in 2005. Some observers also say that by allowing Lukashenka to step into the limelight, Putin's regime hopes to deflect criticism of its own rights violations.

Economically, Russia's warm ties with Belarus may have helped the state-controlled Russian gas giant Gazprom to wrest control of the Belarusian section of the Yamal-Europe pipeline from a reluctant Lukashenka last December. This pipeline carries 10 percent of Russian gas exports to Europe. But Putin and Lukashenka have not always enjoyed a close relationship. While Russia and Belarus have long planned to join in a union state that would use the Russian ruble as its currency, Lukashenka was severely angered by a proposal Putin made in 2002 under which Belarus would virtually become a part of Russia. 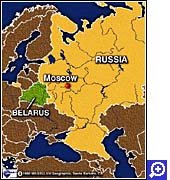 Nevertheless, Heritage Foundation Director Volk said Moscow's support of Lukashenka is unlikely to falter in the future, provided the Belarusian president remains loyal to the Kremlin. "This [support] will take place until a person is found in Belarus who, firstly, will be at least as loyal to the Kremlin as Lukashenka, and secondly will enjoy as much support from the population," Volk said. "So far, not a single politician has satisfied the Kremlin by meeting these criteria. There are people who can be supported by the population, but the Kremlin strongly fears that they will turn to the West like the Ukrainian government." Other observers, however, say Moscow's backing of Lukashenka could tarnish Russia's image abroad and harm its ties with Western countries, particularly in the aftermath of the March 19 election.
Posted by DH at 9:46 AM