This Time, It's Jail 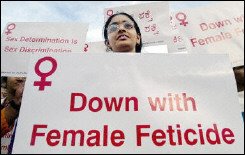 A medical sting operation is responsible for the first jail sentences in India for doctors performing sexual determination tests on preborn children. The test is extensively used in male-dominated societies to eliminate by abortion unwanted girls. And, yes, the doctors who performed the gender tests also did the subsequent abortion.

Here is the story reported, respectively, by the Turkish Press and the India Gazette.
Posted by DH at 4:51 PM