The Tale of the Tapes? Iraq's WMD Games 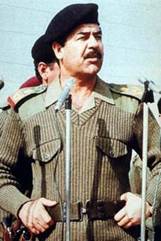 Could it be that the New York Times, the Democrat Party and Barbara Streisand are wrong about Iraq's "Weapons of Mass Destruction"? Let's go to the tapes!

From the Washington Times --

Audiotapes of Saddam Hussein and his aides underscore the Bush administration's argument that Baghdad was determined to rebuild its arsenal of weapons of mass destruction once the international community had tired of inspections and left the Iraqi dictator alone.

In addition to the captured tapes, U.S. officials are analyzing thousands of pages of newly translated Iraqi documents that tell of Saddam seeking uranium from Africa in the mid-1990s. The documents also speak of burying prohibited missiles, according to a government official familiar with the declassification process...
Posted by DH at 11:43 AM