No Quality Without Quantity 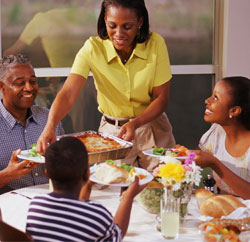 From the World Congress of Families updates ---

For years, mothers that work full-time outside the home have argued that, even though they spend less time with their children than their stay-at-home peers, they enjoy "quality" time that allegedly compensates for the reduced attention. Yet a recent study on the extent and nature of family dinners in the lives of teenagers commissioned by the National Center on Addiction and Substance Abuse (CASA) at Columbia University clearly shows that quality time with children doesn't happen without large quantities of time.

CASA conducted a telephone survey of 1,000 teens, ages 12 to 17, and 829 parents of teens in the spring of 2005 to identify factors that increase the risk of adolescent use of cigarettes, alcohol, and illegal drugs, including marijuana. Confirming a more statistically rigorous study at the University of Minnesota (see New Research, September 2004, p. 2) that documented the protective nature of regular family meals in tempering risky behaviors, CASA discovered that teens who are home for dinner at least five times per week - relative to teens who have no more than two family meals per week - are also more likely to rate their family dinners as high quality.

The frequency of family dinners also appears to improve the quality of family relations, not just the dinners. Relative to teens who have infrequent family meals, their peers from families with a regular dinner time not only report less tension in the home, but are also more likely to approach their mother or father or both when confronting a serious problem. They also are more likely to say that their parents are "very proud" of them.

(Source: "The Importance of Family Dinners II," The National Center on Addiction and Substance Abuse at Columbia University, September 2005.)
Posted by DH at 7:54 AM