The Credentials of the New Cardinal -- MSM Style 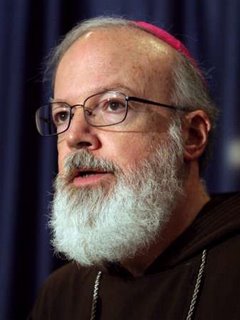 Boston Archbishop Sean O'Malley will be elevated to cardinal tomorrow even though the Lowell Sun seems a bit divided on his qualifications. On the one hand, the paper regards as good things O'Malley's modesty, simplicity, and organizational skills. And they approve his willingness to make tough decisions...well, at least in some matters. As the article goes:

He's credited with helping to save the financially strapped archdiocese in 2003 by selling the ornate Cardinal's Residence to help pay for the $85 million settlement of lawsuits against former Cardinal Law and the church by clergy sex-abuse victims.

And O'Malley has served in the wake of clergy sexual-abuse scandals in Fall River, Palm Beach, Fla., and Boston, where he has shepherded 2 million Catholics since his installation as archbishop of Boston in July 2003. O'Malley settled 500 clergy sexual-abuse cases in Boston alone, which could ultimately cost the archdiocese more than $100 million...

Hmm. What the Lowell Sun interprets only as credentials for criticism are, of course, the primary reasons he is being elevated to Cardinal in the first place. And though it goes intentionally unreported by this newspaper, O'Malley's loyalty to Church teaching does, in fact, earn him the highest respect from many, many Catholics - and others. Congratulations, Cardinal. May God give you strength, wisdom and courage in your new duties.