Castro Gets a Surprise 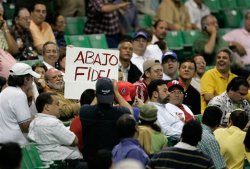 From the web site The Real Cuba.com...

More than one time in the 1950s, members of the 26th of July movement directed by Fidel Castro jumped into the playing field during the World Series games carrying protest signs against the Batista government. They did it because they knew that the games were being broadcasted in Cuba. In addition to displaying their signs, the members of the 26th of July interrupted the games by running all over the baseball field with their signs. Then, those Cubans were considered 'heroes' by Castro.

Now that the shoe is on the other foot and free Cubans are simply exercising their right to free speech in a free country by holding signs WHILE SITTING AT THEIR SEATS THAT THEY PAID WITH THEIR OWN MONEY, the Cuban dictator is whining and crying and threatening to pull out his slave players from the World Baseball Classic and order them to return to his island prison. What a hypocrite this brutal dictator is!

In fact, Castro is demanding the WBC officials install flagpoles with black flags between home plate and the stands to block the messages from Cuban exiles.

Here is the wire service account of the incident but, more important, here is the inside story (with pictures) by the man who took the the anti-Castro sign into the game. Way to go, Enrique!
Posted by DH at 3:17 PM