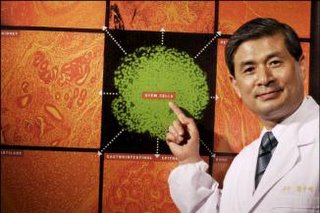 Let's see now -- he's an incompetent, unethical scientist dealing in an immoral field in which the tiny human beings used for research are actually killed.

And he's a proven liar that bilked his government out of millions of dollars.

Furthermore, he's a egotist of the lowest order who refused to apoligize even when caught red-handed in his crimes of fraud...a fraud which monstrously fueled the false hopes of millions of disabled and dying people.

And when this guy is finally fired from his government job, it is the lady who fired him who is brutally attacked?

Sigh. The inmates really are running the asylum.