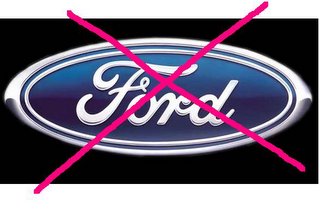 Before Christmas, Ford Motor Company agreed to discontinue what had become an aggressive promotion of the homosexual political agenda (including Ford's public support of same-sex marriage laws). The decision to change direction came after stern protests of Ford's policies were made by many pro-family leaders. The specific points of Ford's "conversion" were:

1. Ford would not renew current promotions or create future incentives that give cash donations to homosexual organizations based on the purchase of a vehicle.

2. Ford would stop giving cash and vehicle donations or endorsements to homosexual social activities such as Gay Pride parades.

3. Ford would not make corporate donations to homosexual organizations that, as part of their activities, engage in political or social campaigns to promote civil unions or same-sex marriage.

4. Ford would cease all advertising in homosexual websites and media outlets (magazines, television, radio) in the U.S. with the exception of a small amount to be used by Volvo. The Volvo ads would be the same ads used in the general media and not aimed at the homosexual community specifically.

Well, it is not yet even spring but Ford has already broken their pledge thus making your letters and your participation in a boycott of Ford products very much in order.

To find out more about Ford's broken promises and to see the subsequent letter of protest sent by Don Wildmon of the American Family Association (co-signed by such folks as Jim Dobson, Bev LaHaye, D. James Kennedy, Tony Perkins, Judie Brown, and many other pro-life, pro-family champions), check out these pages on the AFA website -- page one... and page two.
Posted by DH at 3:29 PM