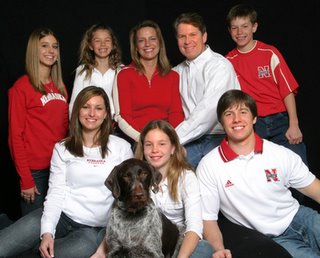 In what was certainly a noteworthy event last week, Republican candidate for Nebraska Governor, Dave Nabity, proposed a specific, detailed legislative bill requiring the expanded disclosure of abortion information. Desiring to give woman contemplating this momentous decision much more information about abortion's many and serious risks, Mr. Nabity used a template first designed by the experienced legal minds of Americans United for Life as a model for his proposed bill.

It is a much-needed action and I heartily applaud Mr. Nabity's efforts to highlight this important issue in his campaign. And, knowing Dave Nabity's pro-life convictions to be sincere and of long duration, I have no doubt he would work diligently to make such a bill become law were he to win the fall election.

So like I said, such a proposal is clearly of great import, especially in the heat of a three-way race for the G.O.P.'s candidacy for Governor -- a race in which all three candidates wear a pro-life mantle. So you tell me then -- why did the Omaha World-Herald fail to even report on Mr. Nabity's proposal? Other Nebraska newspapers covered the announcement. Of course they did; it was news. So why not the World-Herald? Could it be they've already made their pick down there and therefore prefer to ignore stories which might have readers consider the worth of anyone else?

For details on Dave Nabity's plan, check out this page on his web site.
Posted by DH at 1:09 PM