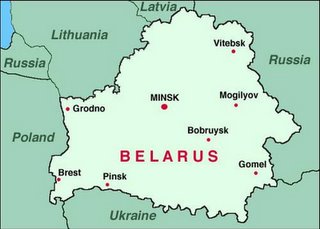 The European Commission is going ahead with plans to begin EU-funded radio and television broadcasts to Belarus. In fact, those broadcasts will start before the parliamentary elections scheduled in that country for March 19. The suppresion of any political opposition to Communist dictator, Alexander Lukashenka, is overwhelming but the EU yet retains some hope of enlightening the people of that country. Indeed, there will be several TV and radio programs dedicated specifically to the election with about $2.5 million allowed by the EU for this effort.

As one who has visited Belarus on many occassions and developed many friendships there, I pray these broadcasts have a strong impact. May I encourage you to pray towards the same end?
Posted by DH at 10:09 AM