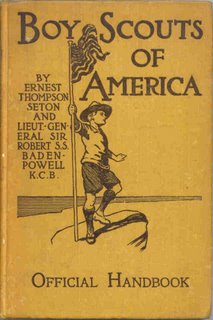 I received an e-mail this evening from a friend who is involved in the local activities of the Boy Scouts of America asking help for a little survey he is doing in anticipation of the Mid-America Council of the B.S.A. celebrating its 90th anniversary. My friend was asking everybody involved on the faculty or staff of Grace University who was ever a Boy Scout to share some of the details of their Scouting career. As I'm teaching a Grace course this semester, I'm apparantly on the adjunct faculty and so was included in the survey. My answer to this query follows:

I wondered why Claire was smiling as she looked through our e-mail. She laughed and explained, "___________ is looking for Grace faculty who have had experience with the Boy Scouts. Do you want to tell him yours?" I started laughing too because in an otherwise forgettable adolescence, two disasters stand out quite vividly from my oh-so-brief tenure as a Scout. Be assured I do not lay any blame at the feet of my Scoutmasters -- they were noble, capable and caring fellows, I'm sure. But then there are limits to what even the best mentors can accomplish when working with real numbskulls like I was.

The first memorable moment came when my troop went up into the mountains to learn some outdoorsman skills, play a wide-ranging game of "Capture the Flag" and cook our own dinner. We were also supposed to fill our canteens from the stream at the foot of the hill for our evening's repast. Always on the lookout for an unconventional way of getting things done (especially if it was easier), I opted to open the spigot on a water tank at the south end of the building. Cool...at least until I took a big swig of the stuff to wash down my baked potato. It was kerosene! I thought I was gonna' die and was only somewhat relieved to find out I wasn't. Goodness; I smelled and tasted like a refinery for a couple of weeks. The only positive (looking back on the affair) was that I was afraid to sneak any of my Dad's cigarettes for quite awhile. I was afraid that as soon as I " lit up", I really would. 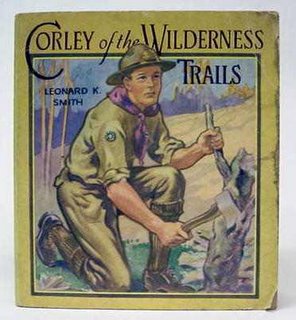 The other disaster happened, I think, the very next outing we went on. My troop (448 in Jefferson County, Colorado, by the way -- why I remember that I'll never know) visited a place we called "Paradise Valley" where we planned to spend a weekend camping. There were three (or maybe four) groups of us. I was in the Panther Patrol which, in retrospect, represented a kind of "rogues gallery" of our neighborhood. Yes, to be fair, one of the Panthers would eventually spend a successful career in law enforcement but at least two of us were destined...no, that smacks too much of determinism...at least two of us would make free moral choices to travel the other side of the law. At any rate, that weekend didn't work out well. First, the Panthers were denied their choice spot of a campsite because the Beaver Patrol (our troop's elite corps) decided they wanted it instead. Feeling wronged, we decided on revenge (certainly antithetical to a Scout's honor) and that night we used our little shovels to dig a trench from the stream into the Beaver Patrol's tent. After rather thrilling results from our escapade, we were quickly named as the culprits. Who else? The most red-handed capture of my criminal career came right at its start. We were scolded, properly punished and warned we had only one more chance. We agreed.

But, like I said, there are some boneheads that just aren't cut out for the Scouting life. We behaved ourselves pretty well the next day but that evening would spell our doom. First of all, we were told how to make a log contraption that would reflect our campfire's heat back into our tent. Ours burnt up. Next, we got to cutting up a little while making dinner and somehow I managed to brand Jimmy D_____ with a hot wiener. Ouch. Now, Jimmy lived across the street from me and was my friend and so the thing truly was an accident...really. Jim was a good Scout about the whole business and didn't rat me out. After all, what's a flaming hot dog between good pals?

The comedic complications of this camping trip were not quite over for the troubled Panther Patrol, however. That night, it rained. And while the other patrols stayed dry and warm, our guys did not. We thought we had done everything right (well, except torching our log thing) but it turned out that we had not only pitched our camp on a slope but we hadn'

t effectively set it close against the ground. Thus, the water came down, came under our tent, came under the polyethylene "sheets" we had lain under our sleeping bags, and, before it was done, carried two of us down to the creek as nicely as if were playing on a Slip n' Slide. That was enough for our Scout leaders and, if I remember correctly, the entire Panther Patrol was relieved from Scout duty -- permanently. What I later heard may even be true; namely, that each of our names and photos were distributed to the B.S.A. with the warning, "Under no circumstances should a troop undertake to make Scouts out of these rascals. They are a danger, both to others and even to themselves." My Scouting days were, alas though probably mercifully, at an end.

But, _____ -- before you conclude that all of the Boy Scout lore and training were wasted on me, let me finish my Scout memoirs with this truth. Ever since those few weeks as a Scout, I have been careful never to let go of a sharp object until the person I'm han

ding it to says "Thank you" or some other acknowledgment that he does, in fact, have control of the object. It was my teachers from Troop 448 that stressed that important bit of advice and it stuck. So, though my life in the 1960's veered sharply from all of the other virtues the Boy Scouts wanted to teach me, I do, thanks to them, have all my toes!

Please know I will understand completely if you choose NOT to include these reminiscences, except maybe that last helpful tidbit, in your general survey!