Carrying a Baby...A Baby Model, That Is 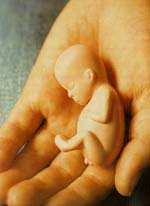 Saving a life can sometimes be an amazingly simple thing. Just ask Ray, the older gentleman I met last Saturday at the Walk for Life down in Lincoln, Nebraska. Ray had strolled by the Vital Signs Ministries information booth that we had set up there in the UNL Student Union following the Walk and he was really taken by our realistic (to the eye and even to the touch) fetal models. He looked up at me with a wink and a smile, "These are grand but you know I carry a baby in my pocket! In fact, I carry twins!" He reached inside his coat and showed me the plastic models of two preborn children, representations that suggest a gestational age of 8-10 weeks. "See? I carry these babies with me all the time."

"Way to go, my friend," I said as I reached over to the chair where my coat rested. Inside my pocket was a model of the very same type. I told him how I try and use the model when talking to people outside the abortion clinic.

Ray then told me about one of the times he was able to share his baby model with someone in hopes of saving a life. He was told by a co-worker that a single young woman in their workplace was pregnant. He later went to the girl and quietly congratulated her. She was touched by Ray's concern but somewhat embarrased because, as she candidy told him, her boyfriend was urging her to "discontinue the pregnancy." She didn't know what she was going to do yet.

Ray asked her if she had any idea how far along she was and the young lady told him. He then went over to his desk and came back with his plastic baby model. "Here," Ray said; "This model is exactly the size of your baby about now. This is what the little guy or the little girl looks like. Why not take it home and show your boyfriend?"

She did and, after a few days, she came back to return the baby model. "I can never thank you enough," she said. "All I did was show him the baby and tell him it looks like the one I'm carrying at this stage and he hasn't mentioned abortion since then. In fact, he's acting like he never brought it up in the first place." Ray told her to hang onto the model anyhow. "You just might find someone who needs to see it someday themselves."

I was, of course, beaming as Ray told me this heartwarming story but my smile became even wider as he answered my question, "Did you ever hear what eventually happened?" "Oh sure," Ray replied. "That little girl is more than 5 years old now and her mother has brought her into work several times. But ever since that day, I know how important it might be to have those baby models around. And that's why I keep two on hand, just in case."

There were many reasons for us to be at the Walk for Life and, like every year, we enjoyed many blessings from the event. But this year -- without a doubt -- the biggest blessing was meeting a dear man who carries life-saving babies with him...just in case.
Posted by DH at 6:08 PM