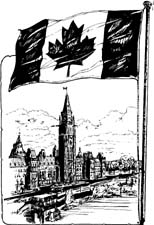 Of course it's too early to start popping the champagne corks, but Canada's Conservatives have moved ahead by substantial margins in today's polls regarding the January 23rd election. There is even a chance that enough Conservatives would be elected to Parliament for the party to form a majority government. Twelve years of Liberal rule may (mercifully) be nearing an end.

The question remains, however -- if Canada's Conservatives do not actively pursue conservative ideals (as their counterparts in the United States' G.O.P have so spinelessly failed to do), how significant would be their victory anyhow?
Posted by DH at 1:03 AM