Babies Not Admitted to "General Hospital"? GH Actress Claims She Was Fired for Pregnancy 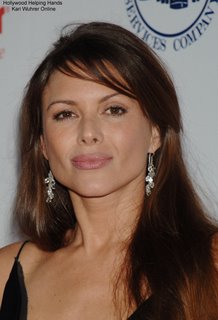 The AP story explains that yesterday former "General Hospital" actress Kari Wuhrer sued ABC-TV, contending her character was written out of the soap opera (meaning she was canned) for becoming pregnant. 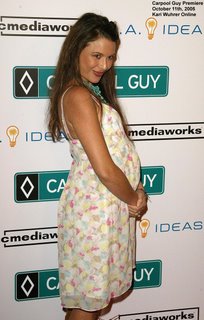 The 38-year old actress, whose career includes a gang of horror films as well as her GH gig, filed the discrimination and wrongful termination suit in Los Angeles County Superior Court. In addition, the suit described the defendants to be agents of sex discrimination, pregnancy-based discrimination, wrongful termination, failure to provide reasonable accommodations for pregnancy, et. al. The suit challenges ABC to pay her at least $3 million in damages because of lost earnings, career damage, and the resultant emotional distress.

Wuhrer says she notified the GH writers and producers that she was pregnant back in August so they would have plenty of time to write her condition into the script. Or, like many prime time actresses have experienced, clothing, camera angles, props, etc. can be used to de-emphasize the "pregnant look". However, GH simply decided to fire Wuhrer two weeks later.

Ms. Wuhrer's suit is notably and welcomingly plain spoken. For instance, "The vile underbelly of the Hollywood Machine encourages female actors to be as beautiful and slim as possible." And it suggests that an actress who "dares" to become pregnant has one choice: "Terminate her pregnancy or be terminated."

The photos shown here are from Kari Wuhrer's web site. The one on the left is a shot used for one of Wuhrer's charity functions; the other a more recent photo (showing an obviously pleased and proud mother) at an October film premiere.

Look here for another quick take on the story from TMZ.com.
Posted by DH at 12:54 PM