Alito on the Rack 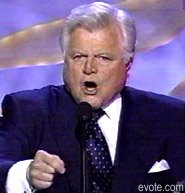 Senator Ted Kennedy's opening remarks in the confirmation hearings of Samuel Alito were as savage and unfounded as expected. This despite the fact that Kennedy's view was much different the last time Alito was being confirmed by the Senate. Then Kennedy said, "You have obviously had a very distinguished record. And I certainly commend you for your long service in the public interest. I think it is a very commendable career and I am sure you will have a successful one as a judge." Why the big change? As Andy used to say of Barney, "He's a nut." But in Mr. Kennedy's case (he of the adultery, the drunkeness, the passion for abortion, the ongoing disdain for his own Catholicism, the lifestyle of lies and slander, the cowardice in leaving a young girl to drown, and so on), the innocence and good nature of Deputy Fife is completely absent.

Also very instructive (and very frightening) in the opening remarks of the Democrats is their amazing distortion of the constitutional government they serve in. For instead of viewing the United States as a representative republic, with ultimate responsibility vested in the people's will, the Democrats in the Senate clearly believe Americans serve under the courts. Wisconsin Democrat Senator Herbert Kohl -- "Before we give you the keys to the car, we want to know where you will take us." New York Democrat Senator Chuck Schumer explained the same idea in a press conference the night before, pledging to grill Alito hard since, after all, the Court decides "where we pray, how we live, who shall live, and who shall die."

The correct understanding, of course, is that Americans are not supposed to be under the courts, whatever the wishes of the Democrats are to avoid the judgment of the majority. Instead, as Tony Perkins of the Family Research Council points out, Americans are to be under God and the Constitution. Republican Senator from Kansas, Sam Brownback, described it aright when, in his own opening remarks, he described Chief Justice John Marshall. Marshall was a tremendous jurist, Brownback argued, but Marshall definitely embraced the idea that judges interpret what the law is; they don't invent it themselves and they don't seek to execute it themselves.
Posted by DH at 9:14 AM