Barkin Up the Wrong Tree (And Other Pro-Life News) 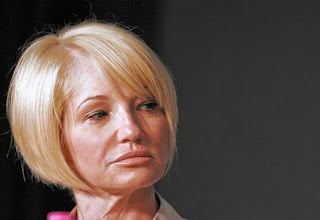 * Award-winning actress Ellen Barkin, that sweet, sensitive Democrat who made waves (but only in the alternative press) for tweeting a couple of days ago that she hoped Hurricane Isaac would hit the Republican convention and “wash every pro-life, anti-education, anti-woman, xenophobic, gay-bashing, racist SOB right into the ocean” has long been an ardent promoter of abortion.

Steven Ertelt from LifeNews.com reminds readers that it was Barkin who boasted at a press conference 8 years ago, “I am the mother of a 12-year-old girl and I can tell you unequivocally that if my daughter was pregnant, I would take her kicking and screaming to have an abortion.”

* The family of a woman who died from a botched abortion at a Chicago Planned Parenthood is suing the mega-abortion corporation. And another woman (this one in Houston) is rushed to an ER after a Planned Parenthood abortionist messes her up badly.
Posted by DH at 10:55 AM