"Why Is the Black Abortion Rate So High?" 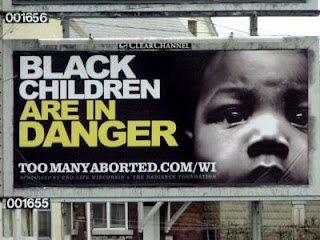 Even though it comes from a "neutral" news source that tries to excuse Planned Parenthood, this article ("Why Is the Black Abortion Rate So High?" written by Lynette Holloway and posted at The Root) exposes crucial facts that are usually well hidden by the mainstream media.

The national disparity in abortions is even more staggering. Overall, African-American women account for 36.4 percent of all pregnancy terminations in the United States, although blacks make up only 13 percent of the population, according to the Centers for Disease Control and Prevention.The agency attributes the higher abortion rate among blacks to a higher incidence of unintended pregnancies.

But is that the whole picture? Consider this: Nearly two-thirds of African Americans polled believe that abortion should never be legal or should be legal only in cases of rape or incest or when the woman's life is endangered, according to a 2004 poll by Zogby International. (This compared with 56 percent of respondents overall and 78 percent of Hispanics.)...

Some black pro-lifers, such as Bomberger, believe that the conflict has a more nefarious cause. "I've done research that could not be explained by socioeconomic factors," he says.

Bomberger and others like him accuse white abortionists of exhorting black women to obtain abortions as a form of genocide. Planned Parenthood is one of their targets...
Posted by DH at 9:58 AM