What NBC DIDN'T Tell You About the Olympics 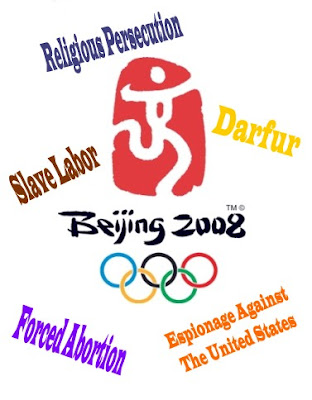 Poor old Robert Mugabe. Do you know what that guy needs? An Olympics. Harare 2012, he really missed a trick there. A well-run Games and nothing else matters. Put on a show, throw up a couple of impressive buildings and the world is your friend.

The road home from Beijing is lined with wide-eyed converts who've seen the light on totalitarianism. “China has set the bar very high,” Jacques Rogge, the president of the International Olympic Committee, said. “There are some things that London will not be able to compare to, or equal - such as the ability to bring hundreds of thousands of volunteers to different sites.” Yes, Jacques, it is amazing what people can achieve once they appreciate there is no alternative.

And there isn't in China. About 100 miles south of Beijing, an agricultural community has been destroyed because its water supply was rerouted to deliver a green and blooming Olympics. Road blocks stop people from that area travelling north, while taxi drivers were told to take any passengers with unusual requests directly to the police.

Official reports state, however, that the 31,000 people that lost homes or land are delighted to be making this sacrifice. “The legacy of these Games is ultimately up to the Chinese people,” Rogge added, but that is a lie too. Nothing can be decided by an oppressed people...

Not that it made much pretence of reform while under scrutiny. There were 77 requests to protest in official zones agreed with the IOC, but none was granted. A number of applicants were sentenced to re-education through labour, including two women, aged 79 and 77, one of whom is disabled and almost blind...

Of course the Beijing Games went without a hitch. Give anyone total, terrifying control over a population, with force, and they will make them march in unison, drum, smile, dance, mime, jump through hoops if necessary. “They don't look very oppressed,” wrote one observer. No, pal, and neither would you if you knew the consequences of complaint.

The same columnist wrote that the young girls carrying the flags before events were “perfect examples of what a beautiful young Chinese woman looks like”. Yes, they were. This is how that was achieved. Those applying for the job, who numbered thousands, had to be above 1.66m tall, pretty of face and stripped naked for the judges, who measured their body proportions. Isn't that healthy?...
Posted by DH at 10:35 AM