"Bush Got It Right" On Stem Cell Research 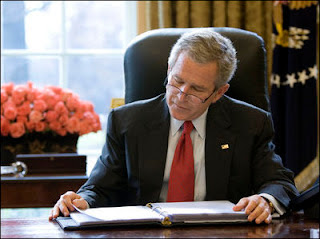 Charles Krauthammer hasn't completely agreed with President George W. Bush on stem cell policy. Indeed, he has supported embryonic stem cell research (though with some misgivings) and believed that Bush's moral convictions on the matter were using up way too much of his political capital.

Krauthammer is a Pulitzer Prize-winning columnist with a decidedly conservative perspective. Yet as a non-religious psychiatrist, he did not appreciate Bush's spiritual convictions that scientific research must proceed along lines that protect the inviolable right to life.

Nevertheless, in the wake of recent breakthroughs in stem cell science, Krauthammer voices his renewed respect and appreciation for the President and argues in this moving Washington Post column that George Bush has been vindicated...and then some.

A decade ago, [James A.] Thomson was the first to isolate human embryonic stem cells. Last week, he (and Japan's Shinya Yamanaka) announced one of the great scientific breakthroughs since the discovery of DNA: an embryo-free way to produce genetically matched stem cells.

Even a scientist who cares not a whit about the morality of embryo destruction will adopt this technique because it is so simple and powerful. The embryonic stem cell debate is over.

Which allows a bit of reflection on the storm that has raged ever since the August 2001 announcement of President Bush's stem cell policy. The verdict is clear: Rarely has a president -- so vilified for a moral stance -- been so thoroughly vindicated.

In doing so, he invited unrelenting demagoguery by an unholy trinity of Democratic politicians, research scientists and patient advocates who insisted that anyone who would put any restriction on the destruction of human embryos could be acting only for reasons of cynical politics rooted in dogmatic religiosity -- a "moral ayatollah," as Sen. Tom Harkin so scornfully put it.

Bush got it right. Not because he necessarily drew the line in the right place. I have long argued that a better line might have been drawn -- between using doomed and discarded fertility-clinic embryos created originally for reproduction (permitted) and using embryos created solely to be disassembled for their parts, as in research cloning (prohibited). But what Bush got right was to insist, in the face of enormous popular and scientific opposition, on drawing a line at all, on requiring that scientific imperative be balanced by moral considerations...

The rest is here.